An Accountant’s Night Out 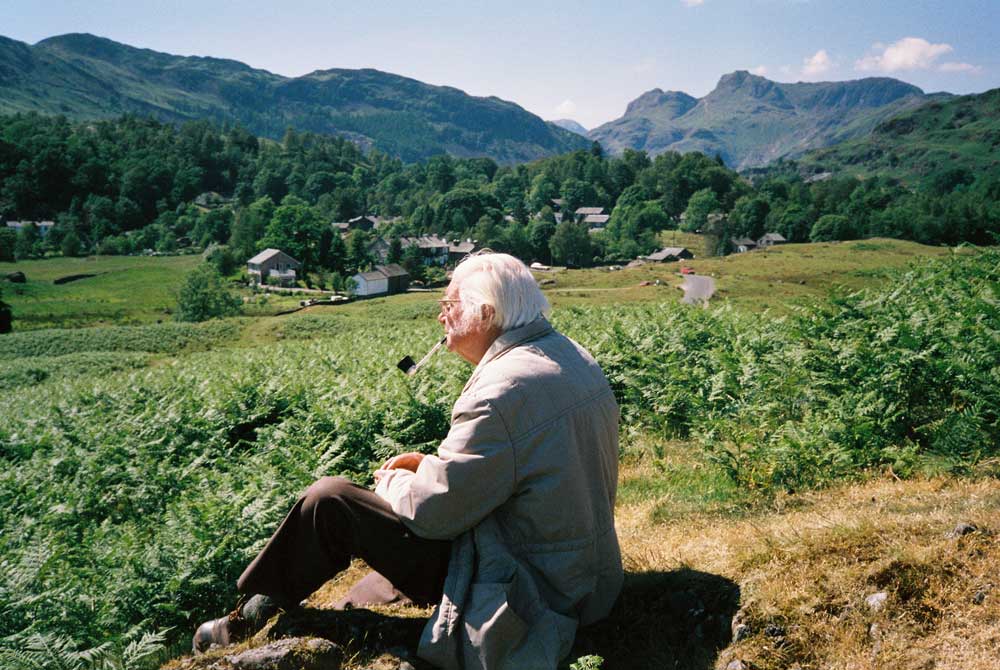 September 2019. Driving up to the Lakes with the radio on, I had the misfortune of hearing the BBC news reporting ‘revelations’ from David Cameron’s memoirs. I switched off and within a few hours I was standing on a grassy shelf below the rocky upper reaches of Dungeon Ghyll. It was almost instant relief from the atmosphere of a country going increasingly toxic through Brexit.

In 1957, with a new Tory Prime Minister at the helm, Alfred Wainwright, AW, found himself at the same spot, surveying the routes up Harrison Stickle for the third of his Pictorial Guides to the Lakeland Fells. The Kendal Borough Treasurer was flushed with the immediate success of his first guidebook, The Eastern Fells and his second guidebook, The Far Eastern Fells, had just been published. This was Wainwright aged fifty at the height of his powers, well poised to take advantage of the new age of optimism signalled by the government of Harold Macmillan.

I was following Route One of AW’s various ascents up Harrison Stickle. This begins at the National Trust car park by the New Dungeon Ghyll Hotel and follows the steep bracken slopes alongside Dungeon Ghyll to the broad shelf below the buttress of Thorn Crag. Skirting around this, a climb up stone steps leads to a higher grassy col above 2000 feet. From here I turned left to make the pinnacle of Loft Crag, rather than Harrison Stickle, my first Wainwright of the day. The ridge path heading north-west from here led to a scramble up the pillar-shaped summit of Pike O’Stickle. 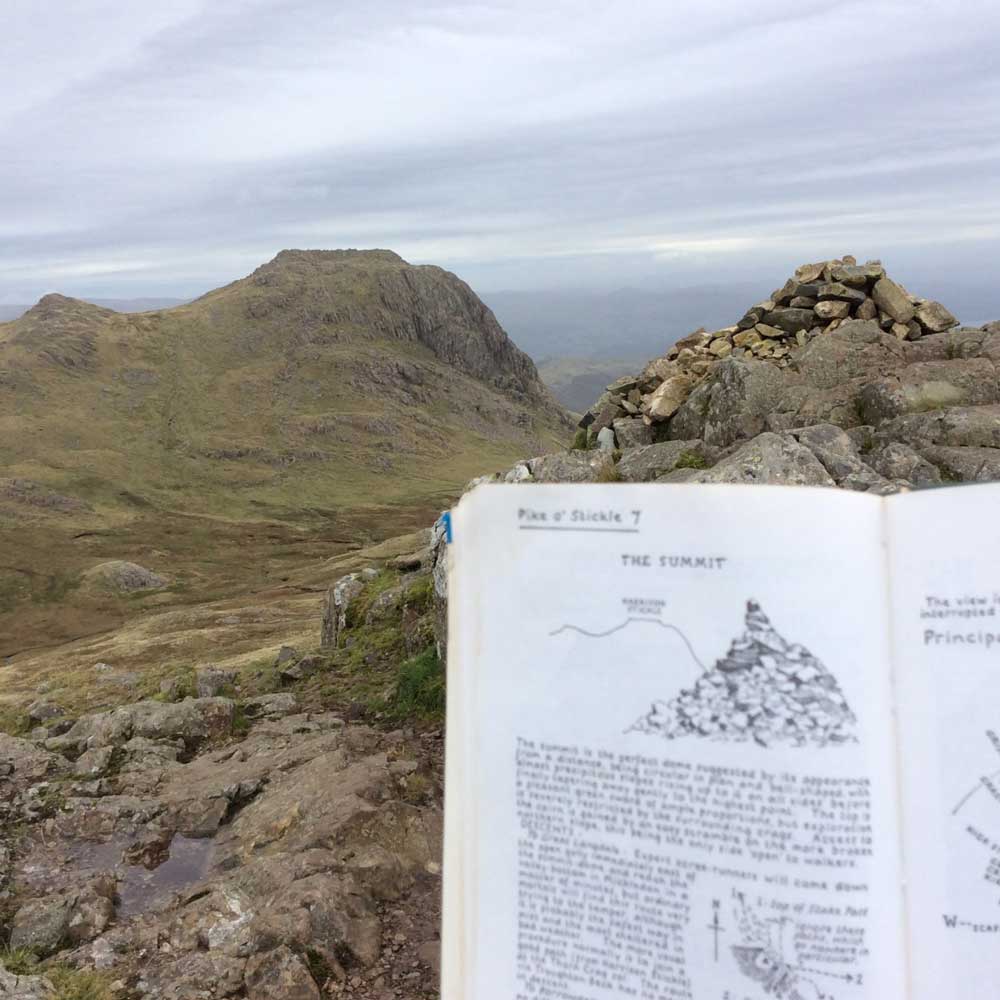 The view from Pike O’Stickle summit to Harrison Stickle

Standing on this westernmost peak of the Langdale Pikes it is easy to dismiss the middle-aged grumbles of AW regarding cars and caravans spoiling this valley. Admittedly on the Sunday I was here, the sun’s reflection was brightly bouncing off the roofs of the cars densely packed together in the rectangular field of the Old Dungeon Ghyll car park. This one little square of coloured metal was a definite eyesore but looked rather lost in the grand sweep of the valley with its patchwork of green fields.

The only other visual intrusion is the artificial zigzag path snaking up the steep flank of Side Pike from the Langdale campsite, the popular route to Blea Tarn and Pike O’Blisco. Man-made paths scarring the fells was another of AW’s bugbears. The car park and the Side Pike path aside, the upper and middle stretches of Great Langdale have not really changed since AW first came here in the 1930’s. The narrow road still winds down towards Chapel Stile. The white painted farms at the foot of the fells still form a neat line along the north side of the valley. Thankfully, the Elterwater quarry, Langdale’s real scar, remains hidden from view.

From Pike O’ Stickle my next objective was Harrison Stickle itself. Rather than follow the obvious path I decided to potter around in the silent tussock land of Harrison Combe, the grey-bleached depression behind the pikes. Here I located the source of Dungeon Ghyll at about 2,200 feet, a limp spring unaware of the drama that awaits it less than half a mile to the south. From here I climbed the pathless western slopes of Harrison Stickle to its summit. This was a nice low key backdoor approach, since most of the people reaching the top were arriving from the direction of Stickle Tarn.

Wainwright’s overnight expeditions were rare but one was spent on the slopes below Harrison Stickle by the headwaters of Dungeon Ghyll. He was not a born survivalist nor indeed a camper. Just a mildly adventurous accountant who owned a top coat, pipe and tobacco. He recalls this night out in his book, Fellwanderer, published in 1966. He didn’t sleep, just roamed about in a light drizzle, then watched a glorious sunrise and observed a fox at play. I did not see a fox below Harrison Combe but picked up a deflated silver foil birthday balloon tangled in a clump of grass.

Walkers mingled on the summit of Harrison Stickle. It was the most people I had seen that morning. The path from here to Pavey Ark meanders in and out of the ridge of rocks leading to the little cairn on top of grey slabs. On this summit I found a foam camping seat that someone had left behind. The dark vertical cliff is really the eastern flank of another Wainwright, the far less dramatic Thunacar Knott. The summit of this higher hill appears as a low rise with a prominent cairn and is connected to Pavey Ark by a well used path, a very easy walk to the 2,351 feet summit.

The cairn on Thunacar Knott actually marks the pre-1974 county boundary between Cumberland and Westmorland. Whilst the parish of the Langdales gets extensive coverage in AW’s Westmorland Heritage, the parish to the north of Thunacar Knott – Borrowdale – does not get any at all. It seems a shame that AW never gave the county of Cumberland the same intricately beautiful treatment that he bestowed upon his adopted county in his magnificent 1970’s book.

On moorland and mountain, parish and county boundaries are traditionally marked by regular spaced ‘Piles of Stones’ or ‘Mounds’ and these are even recorded on the larger scale O.S. maps. The 25 inch County Series of O.S. maps surveyed originally in the 19th century have a curious look when they depict two adjoining counties on the same sheet. They only show the details for the county they are covering so beyond the boundary the map is just blank white space. In the example of the Cumberland 1860 25 inch sheet, the world literally ends at Thunacar Knott and beyond it is a void. 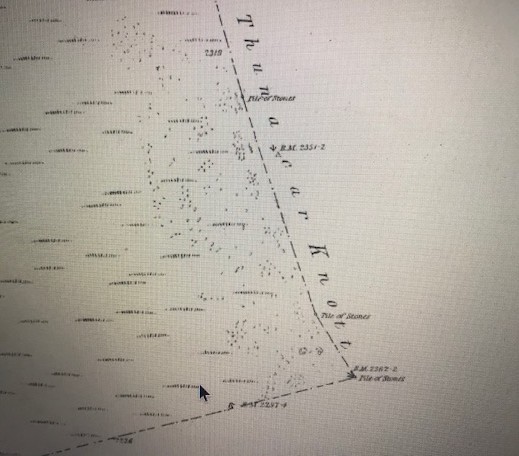 I roughly followed the old county boundary north to the summit of High Raise in Cumberland. It still acts today as an administrative boundary, between the district councils of Allerdale and South Lakeland. The path leading to the trig point on High Raise rises gradually across a boggy moor. The weather was getting murky, the landscape was featureless, and it felt like walking on the dull moors of the West Pennines. But the view from High Raise, particularly across the Langstrath Valley to Scafell, Great Gable and Glaramara is pure Lakeland.

Wainwright was ‘feverishly engaged’ in researching Book Three – The Central Fells in May 1957. Towards the end of this month he was surveying the routes up High Raise. We know this from his personal correspondence with Weaver Owen, the former Kendal bank manager who had recently moved down south. I love the name Weaver Owen, it has a Victorian ring to it. He seems such a fitting minor character to inhabit the Wainwright story.

I have a vision of AW and Owen standing at the bus stop on Windermere Road on a Sunday morning after the war. Bank manager and borough treasurer, both respectably dressed. Half a lifetime of working in oak panelled offices behind them. Stilted small talk politely exchanged as they wait for the bus. Both secretly burning inside with the passion to climb mountains. Perhaps AW was really like Mr Anchovy in the celebrated Monty Python sketch. An unfulfilled man who dreamed of swapping the stuffy world of accountancy for the thrilling life of a lion tamer.

He certainly found his own excitement on the hills. As well as spending the night on Harrison Stickle we know that AW stayed out overnight in a Grisedale barn on Coronation Day. He also spent an evening out in Mardale, with yet again no tent, in the company of Weaver Owen. Such daring escapades aside, AW could always be relied upon to channel his inner accountant. His surveys of the fells remained methodical and exact. 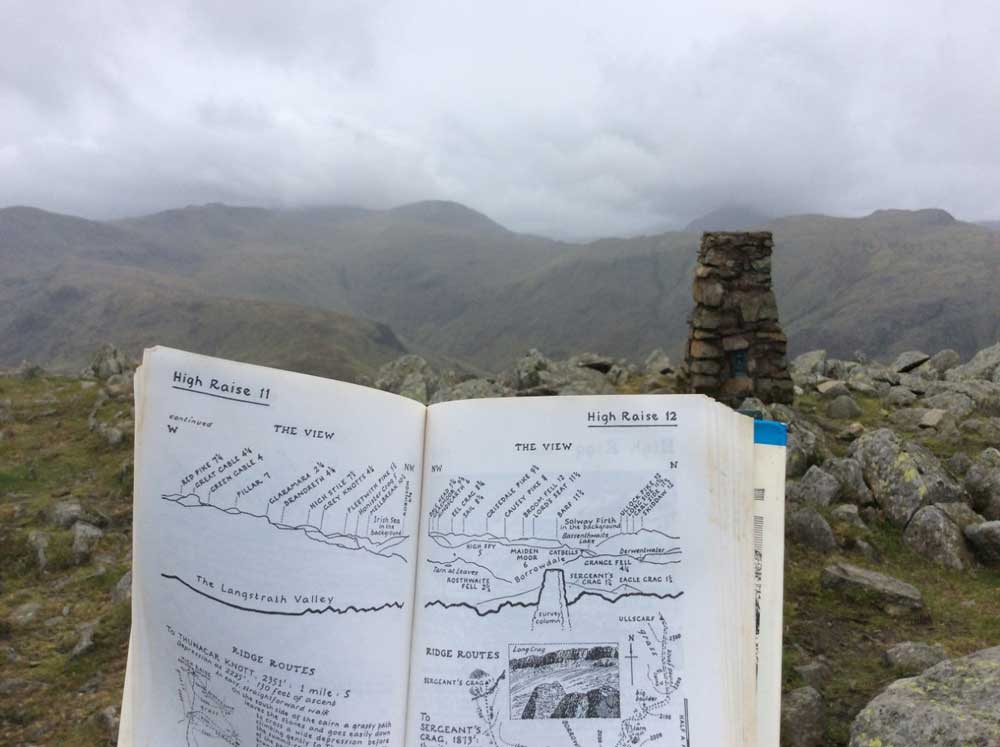 In The Central Fells, the old fence and the ‘path of sorts’ that he mentions leading from High Raise to Sergeant Man are still there and remain a useful guide to crossing this featureless moor. The fence is actually the boundary between two Cumberland parishes – Borrowdale to the west and St John’s Castlerigg and Wythburn to the east. A stone just south of the ruined fence line marks the old county boundary again and a return to Westmorland.

The mist of High Raise had developed into a light drizzle by the time I reached the distinctive sentinel of Sergeant Man, with its commanding views down Easedale and Langdale. As Pavey Ark is to Thunacarr Knott, so Sergeant Man is to High Raise – an endearing crag to the east of its less charming mother hill. I heard a curlew calling overhead on Sergeant Man, a sign that summer was not quite over.

The path drops from Sergeant Man to meander between tarns, marsh and rock outcrops along the broad shoulder of upland stretching eastwards to Blea Rigg. Easedale and Codale Tarns come into view. The summit of Blea Rigg was my last Wainwright of the day and I searched out the stone shelter marked with an ‘X’ on AW’s sketch maps. I decided to head back to Langdale by scrambling through dense spiky bracken directly towards the Mill Gill path below Stickle Tarn. Picking up the stone staircase I descended Mill Gill.

I was about 800 feet up from the valley when I passed an exhausted elderly man hobbling his way slowly down the steps with the aid of two walking poles. He asked me if he was on the right path for Grasmere. I had to give him the bad news that he had come off the mountain the wrong way. A taxi from the New Dungeon Ghyll Hotel now seemed his most likely option.

Driving home I listened to music on the radio to avoid the irritating loop of BBC news about Brexit. AW was so right when he said that the fells make you placid. We were living in changing times just like Wainwright was in the 1950’s. Back then the age of mass consumption, a boom in car ownership and increased leisure time was even starting to be noticed in Langdale. But some things, like a night on the fells watching the sunrise, never change. 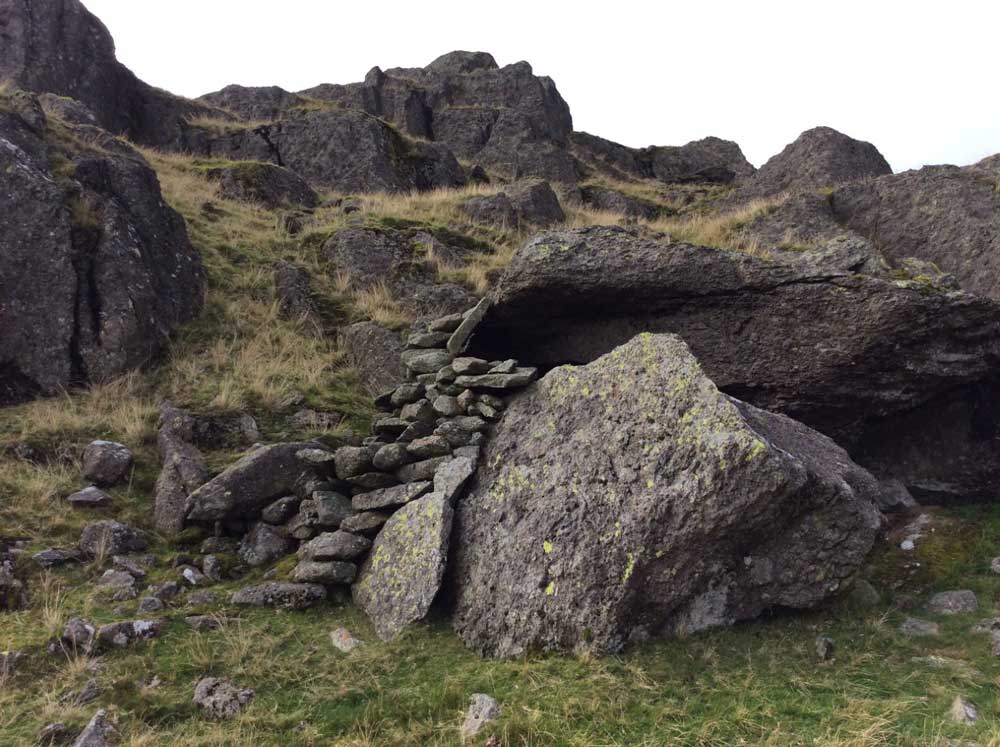 The stone shelter on Blea Rigg