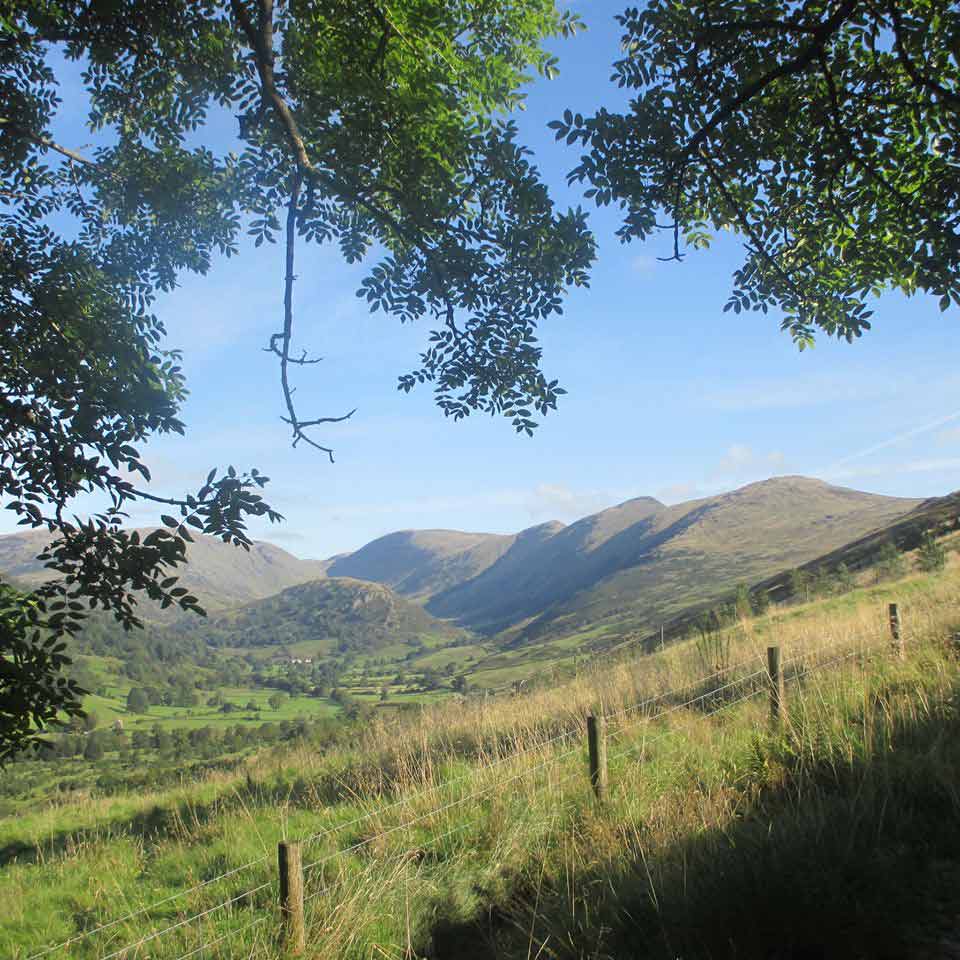 Despite nearly four decades of walking in the Lake District I have never kept an accurate written log. Throughout this time I estimated, at a rough count, that I had walked up over half of the total number of 214 ‘Wainwright’ summits. The only records of this are the happy memories inside my head. So in the autumn of 2019 I decided to start all over again, climbing both the Wainwrights I knew and those I didn’t. Only this time I’d make notes.

I started with the familiar peaks of the Kentmere Round. These have a special significance in the Wainwright story since they include the mountains that Alfred Wainwright, AW, climbed on his very first visit to Lakeland. He had disembarked from the Ribble bus at Windermere train station with his Yorkshire cousin, Eric Beardsall, on Saturday the 7th of June 1930. On this day he experienced his personal transfiguration on the little rocky outcrop of Orrest Head. This was AW’s first glimpse of heaven. On Sunday the 8th of June, after a night in a Windermere B and B, he set off with Eric to conquer some proper mountains.

The Kentmere Round allows the walker to ‘bag’ nine Wainwrights in one day. This is made even more challenging if you are driving and have to park further away from the natural starting point, the valley hamlet of Kentmere. Traditionally, parking spaces are hard to find here unless you arrive at the crack of dawn. Fair play to Kentmere. A formal car park would not fit in this unspoilt valley carved by Kendal’s river, the infant River Kent. Rather than rely on the whim of a local farmer who apparently opens up his field for cars, I have in the past explored these fells from the western side by starting on the roadside by Troutbeck church.

It was from here, also on a Sunday, also on the 8th of the month – in my case, September – that my new Wainwright adventures began. It started with the steep climb along the walled track leading to the highest point of the Garburn Pass, the byway linking the two valleys of Troutbeck and Kentmere. Looking back southwards the view is to Windermere, where the placid lake on this clear, cool day resembled a thin, black mirror scraped by the straight white lines of tiny  diamond-like sailing boats. Two robins hopped along the wall looking down on the upper Troutbeck valley which revealed the first visible signs of autumn. Orange and brown tinges dappled the woodland fringing the base of Troutbeck Tongue and the tips of the bracken ferns slowly curling back their green carpet from the summer slopes of the fells.

It took an hour to reach the simple cairn on mild-mannered Yoke, my first Wainwright of the day. Here I met that familiar phenomenon of Lakeland hills – the scrawny middle-aged fell runner. In this case, the slight, athletic woman was hampered by a blundering brown labrador attached to her waist by an extended lead. On the summit of Yoke the intransigent dog sat down in protest and wouldn’t budge. The woman exclaimed that her overweight companion didn’t really like running.

The ridge route is then down and up to the higher summit of Ill Bell and down and up to Ill Bell’s baby brother, Froswick, from where you get the first view of Ullswater. I like the name Froswick for a fell since it has a Dickensian ring to it, like the surname of a gout-suffering bachelor uncle in Great Expectations. It was on Froswick where my path with AW, aged twenty-three and a half, collided. This perfectly formed conical peak is the first ‘Wainwright’ that Wainwright climbed! He did so in the company of cousin Eric on Sunday the 8th of June 1930. They were following the route of the ‘Roman Road’ marked on the Ordnance Survey map crossing High Street and the fells east of Ullswater. Having climbed out of the Troutbeck valley via Scot Rake, they arrived on the Froswick ridge and from here they plodded on to Thornthwaite Crag, High Street and the line of grassy hills above Pooley Bridge.

Nearly nine decades apart, the view from Froswick has not really changed since AW was here in 1930. Look east to the head of the Kentmere Valley, the Nan Bield Pass and the distant Pennines. Look west to the rugged outline of Bow Fell and Crinkle Crags. Through Wainwright’s exquisite guide books we know where he went and what he saw. This is why it is so easy to conjure up his spirit in these mountains. He has trodden the same paths before us.

AW was back on the Ill Bell ridge as early as May 1931 in the company of three work colleagues from Blackburn Town Hall. This was day one of his meticulously planned Whitsuntide tour which didn’t get off to a good start. Torrential rain drove the local government clerks off the ridge and forced them back down to Troutbeck, so they never got as far as High Street. From this disappointing opening, a young AW was to spend the rest of the 1930’s enjoying an unforgettable decade exploring the Lakeland Fells in a time before the mass influx of cars.

This first age of AW in Lakeland was set against the backdrop of 1930’s unemployment and economic depression when the British Empire was still at its zenith. Fast forward to the 1950’s and we see a mature AW in his second age, as the respectably stout Kendal Borough Treasurer in his mid-40’s, taking photos and making field notes as he tramped the lonely High Street fells before sitting down at home to sketch and write his Pictorial Guide to the Far Eastern Fells.

AW undertook field work for this volume (Book Two) throughout 1955 and 1956. The world, but not the fells, had changed dramatically in the twenty-five years since he first came to the Lakes. The British Empire was in retreat and the householders of Kendal, just like in every other town in the country, were busy buying televisions on hire purchase. The consumer society had come to the north. On a September Sunday in 2019 Britain as a nation was still in retreat, dangerously self-imploding amidst Brexit chaos.

Perhaps in the 1950’s AW ‘never had it so good’ since he could walk on the Far Eastern Fells ‘from morning till dusk without a sight of human beings”. On the day I walked on the High Street range the hills were relatively quiet but not entirely free of people. I had met a few mountain bikers puffing their way over the Garburn Pass, the runner with the panting fat labrador on Yoke, and a trickle of walkers with the click-clack of fibreglass poles on the rocks of the Ill Bell ridge. It was only when I reached the beacon on Thornthwaite Crag that I encountered more than half a dozen people eating lunch on the stone slabs.

As I carried on along the easy path running by the broken wall which takes you to High Street, a faint whirring sound surprised me from behind. Two nonchalant men on electric mountain bikes slowly glided by towards the top of High Street and had gone by the time I got there. At the trig point I obligingly took a photo for two young Geordie girls who had reached the summit. One of then saw my Wainwright Pictorial Guide open on the High Street pages and looked quizzical so I explained about Wainwright She seemed slightly interested but had no idea who he was.

I picked up the stone track to Mardale Ill Bell, the broad hill top forming a watershed between the River Kent, flowing south, and the tributaries of the River Eden, flowing north. The descent from here leads to the stone shelter at the top of the Nan Bield Pass, the old packhorse and drovers’ road through the mountains from Kentmere and Kendal to Mardale and Penrith. A few walkers congregated here at this crossroads of paths and some followed me up the steep rocky ascent to Harter Fell. One of the cairns leading to the summit provides the view looking north along the length of Haweswater celebrated in AW’s sketch (The Far Eastern Fells: Harter Fell 10) which depicts the 1950’s author sitting against the cairn and admiring the view.

With his spectacles, pipe, tweed jacket and shock of white hair, this was one of many self-portraits of the author. Like Alfred Hitchcock’s walk on parts in his films, AW teased his readers with cameo appearances in the pages of his books. The first was the sketch of a reposing AW admiring Blencathra from Clough Head in the first volume of his Pictorial Guides (The Eastern Fells: Clough Head 7).

The summit cairn on Harter Fell with its tangle of metal fence posts remains just the same as AW sketched it over sixty years ago. But his ‘traces of fence’ leading off the hill is now a new post and wire fence guiding the way onto my penultimate Wainwright of the day, the round grassy spur of Kentmere Pike. It was at the trig point here that I obliged again by taking a photo of a party of five middle-aged men going in the same direction as me.

The route to the last of the Kentmere Round Wainwrights is along a peaty ridge of parched yellow moorland grass. Shipman Knotts is a curious collection of craggy knolls perched high above the lonely vale of Longsleddale. From here I clambered down thick slopes of bracken to farm buildings at Stile End and joined the winding lane to Kentmere village. It was now late on an autumn Sunday afternoon. The sun’s struggling rays, last seen fading far out of Morecambe Bay, were now hidden behind the great green bulk of Sallows leaving the dale in a slumbering half-dusk.

I took a shortcut across fields to cross a footbridge over the River Kent and join the Garburn Road behind the Badger Rock. Despite having to climb back up to the top of the Garburn Pass and descend steeply to Troutbeck in the dark, I was still pleased that Kentmere didn’t have a tourists’ car park. Take away the cars from most of the Lake District dales and you will see them much as AW saw them in the 1930’s and 1950’s – unless they have been flooded for reservoirs or blanketed with conifer plantations between the wars.

In the ninety years since AW first came to the Lakes, Britain has lost an empire and become a car park. Thankfully, we can still enjoy the fell tops just as he enjoyed them. 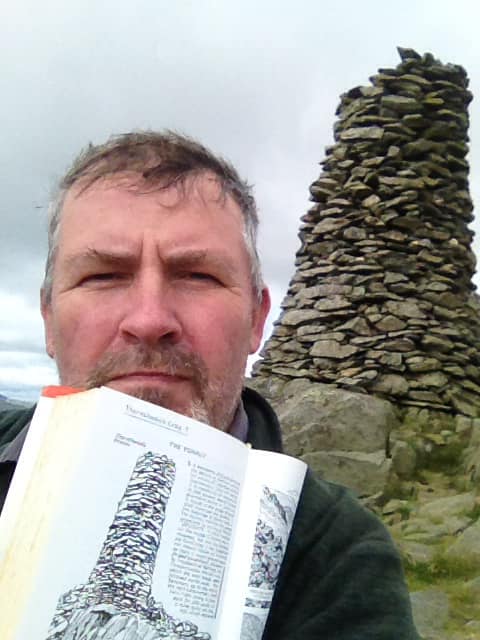