Out of the Manchester Blitz there came a Wimpy Bar 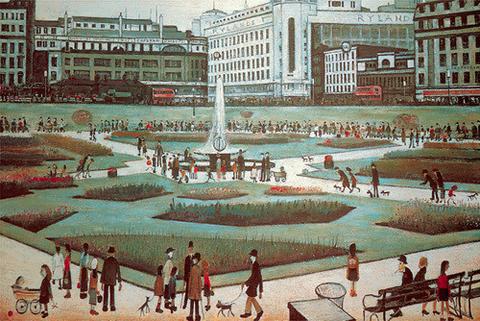 Piccadilly Gardens is a scruffy shadow of its former self. A truncated patch of muddy grass and concrete next to a tram stop. Yet for most of the 20th century it was a green oasis of sunken lawns and colourful flower beds tended by Manchester Corporation’s Parks Department. The formal gardens, created partly on the site of a Georgian lunatic asylum, even survived the major redevelopment of this part of the city centre in the late 1950’s and early 1960’s. This was a period bookended by L.S. Lowry on canvas and Julie Christie on film. I always think of these two when I walk around Piccadilly today.

Lowry’s oil on canvas, ‘Piccadilly Gardens’, was painted in 1954 and is on public display in the nearby City Art Gallery. The artist’s familiar throng of matchstick figures are depicted promenading through the gardens with prams and dogs on leads, idling on benches, enjoying the water fountain with their children. Around the fountain, which is placed slap bang in the middle of the painting, the green lawns and triangular flower beds radiate out in a series of straight lines. 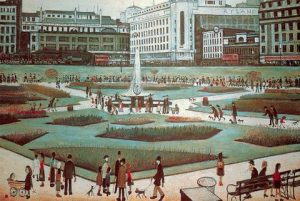 The gardens alive with Lowry’s people contrasts with the row of high warehouse buildings dominating the background of his painting. They give the impression that the green space is enclosed on all sides even though we only see the buildings alongside the junction where Piccadilly meets the top of Market Street and Mosley Street. The most dominant building is the elongated white Portland stone warehouse of the Rylands textile firm, built in 1932 by Harry S. Fairhurst, who designed many of central Manchester’s most iconic Edwardian warehouses. In the 1950’s this became Paulden’s department store and later Debenhams. A bit further to the right, Lowry even offers a glimpse of another Portland Stone building – the Woolworth’s store built in 1928.

Behind the spot where Lowry painted was a big hole. This part of the city came off badly in the Christmas Blitz of 1940 when the Luftwaffe dropped tons of high explosives and incendiary bombs across the city targeting key commercial institutions like Trafford Park and the warehouse districts around Portland Street and Victoria Station.

Piccadilly Gardens was covered by air raid shelters for city workers. On the night of 22nd December, a whole row of buildings fronting the gardens from Mosley Street to Portland Street was bombed and reduced to a pile of smoking rubble. The burning warehouses were one of the most serious incidents in the several nights of bombing that peppered the city and led to nearly 700 civilians dead and over 2,300 injured.

At the same time, thanks to the Luftwaffe, another warehouse block behind the Co-operative Wholesale Society buildings was wiped off the map opposite Victoria Station. The CWS responded with a short propaganda film, Manchester Took It, Too, made by the publicity department of the CWS film unit as a morale booster to staff. It highlighted the efforts of the CWS’s own home guard and fire units against the backdrop of the clear-up operation in December 1940, the key message was that, ‘The spirit of co-operation cannot be destroyed’. The film was shown in northern cinemas in the autumn of 1941 and included footage of U.S Republican politician Wendell Willkie, born in Indiana the son of German immigrants, being shown around war damaged Manchester by the city’s Lord Mayor. The sombre voice-over announced him, ‘A friend from a friendly land’. 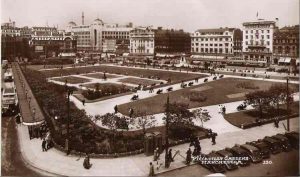 Postcard of Piccadilly Gardens 1949. Left of this is a bomb site!

The city’s bomb sites lingered on for decades after the war. The rubble was crushed and simply rolled flat over the exploded craters as post-war austerity gripped the industrial north. Yet it was the two huge vacant plots by Victoria Station and Piccadilly Gardens which heralded the dawn of a new modern-looking Manchester in the 1960’s.

Near Victoria Station, on land once occupied by warehouses enclosed by Dantzic Street, Miller Street and Angel Street, 1959 saw construction work begin on what was to be Manchester’s first ‘skyscraper’. The modernist CIS Tower built in steel and concrete was completed in 1962 and took its inspiration from the Inland Steel Building in Chicago. It was the tallest building in Manchester as well as the tallest building in the UK for a short time. It became the national headquarters of the Cooperative Bank, in the shadow of the Co-operative’s Victorian premises that had survived World War Two relatively intact.

‘Cottonopolis’ with a touch of the American Midwest skyline was absurd enough but it was soon topped by the space age bonkers that sprung up on the vast crater overlooking the south side of Piccadilly Gardens. In 1954 Lowry had captured the open space on canvas less than a generation after the Manchester Blitz. If he had painted from the same spot just a decade later then his harried working class figures would have been even more out of place,  staring upwards to the top left of the painting wearing an expression of shock and awe. They would have all been agog at the crazy skyline of the newly opened Piccadilly Plaza.

The person called upon to develop this bomb site was a man who had spent the war years constructing air strips and military establishments – Bernard Sunley. After the war his London-based construction and property empire set about the task of rebuilding battered British cities. Piccadilly Plaza – the exotic name given to a disjointed collection of brutalist glass and concrete edifices – was constructed by the Sunley Group in the first half of the 1960’s. The developer did have the misfortune to die in 1964 before his Manchester project was finally completed. Still, two of the new office buildings – Bernard House and Sunley Tower – bore his name. 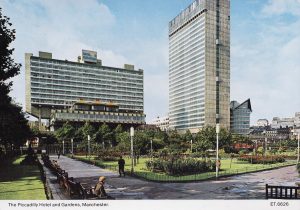 Piccadilly Plaza was an attempt to bring modern shopping, offices and hotel accommodation to the heart of the city. Just across Piccadilly Gardens were the traditional department stores of Lewis’s, Pauldens, Woolworths and, in nearby Oldham Street, the Harrods of the North, the furnishers Affleck and Brown. These were all housed in vast three or four storey Victorian and Edwardian warehouses.

It was tradition for the staff of Pauldens to change into evening dress in the afternoons but Piccadilly Plaza’s first retail outlets reflected a changing shopping scene. It offered indoor units as well as shop fronts facing the bus station. A Wimpy Bar, H Samuel the Jewellers, Wakefield’s Army Stores, Mothercare, the Milkmaid Cafe and numerous banks, travel agents and gents and ladies outfitters established themselves here. You could even get a pizza on the piazza! The plaza’s  upper floor attracted the offices of Air India, Air Canada, the Milk Marketing Board and Gus Demmy the bookmakers.

Rising above these offices and shops was a rooftop car park and the multi-storey Piccadilly Hotel. Next to it was the 24 floors of the office block Sunley Tower, and next to this was the eight storey Bernard House with its distinctive ‘hyperbolic paraboloid’ roof. In essence this was a giant glass and concrete Japanese pagoda planted on top of a car park in the middle of a townscape of Victorian warehouses.

Like three odd siblings who had nothing in common and never spoke to each other, Piccadilly Hotel, Sunley Tower and Bernard House struck an incongruous note. But anything went in the swinging 1960’s. This was not the age of scruffy old Lowry getting the bus in to town from the drizzly grey Pennine suburbs, but that of foxy young flirt Julie Christie arriving up north on the Intercity train from the cosmopolitan concourse of London Euston.

Nonchalantly swinging her handbag through the streets of an industrial city being knocked down and rebuilt, Julie Christie’s first scene as unconventional north country girl ‘Liz’ produced one of the seminal images of post-war British cinema. The film was 1963’s Billy Liar and one of the locations used for Liz’s carefree skip about town is Manchester’s Piccadilly. She cheerfully breezes past Piccadilly’s statues contrasting with the middle aged women in heavy overcoats and men in macs and trilbies. Behind her can clearly be seen the   scaffolding clad around the the emerging towers of the new Piccadilly Plaza.

Unkempt but sexy, upbeat but poor, Liz moved and acted quite unlike any northern woman seen on the big screen. In Billy Liar, the eponymous hero’s two other love interests – the docile Barbara and the beehived banshee Rita – were more traditional 1950’s stereotypes. Liz returned to a northern city reinventing itself (most of the locations used in the film were around Bradford) and she symbolised the modern transformation.

Julie Christie’s fictional Liz and the Piccadilly Plaza were made for each other. New woman. New city. In physical form they both stuck two fingers up at the crumbling old industrial townscape painted by Lowry. The flower beds of Piccadilly Gardens at least survived a few decades longer. 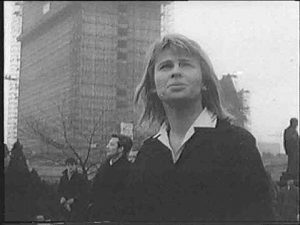 Julie Christie in ‘Billy Liar’ (1963). Behind her the scaffolding rising up the new Sunley Tower (left) and Bernard House (right).