Journey to the Source of the Stream Behind Our House 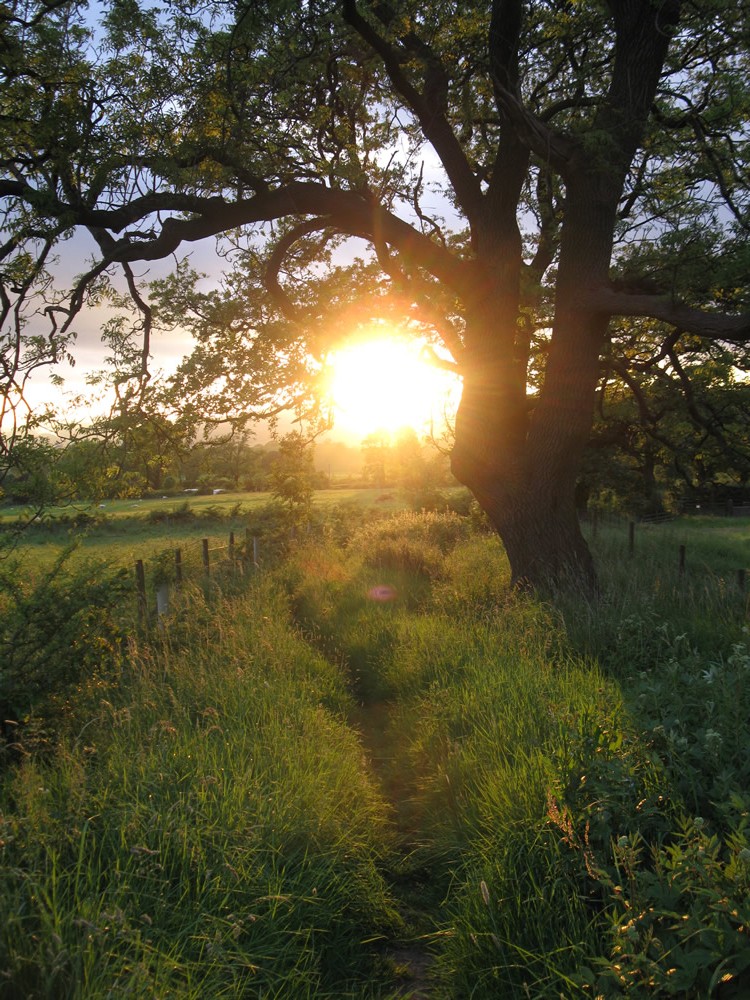 I consider myself richer than a king when I can walk out of my house on a summer’s evening and climb Pendle Hill to watch the slow sunset over Bowland’s western fells. Then by the light of June’s strawberry moon I can drop down to the hedged back lanes of silent Worston and traverse the normally treacherous A59 bypass with ease, the hours of dusk at least providing a relatively safe crossing for humans, if not for less fortunate nocturnal mammals.

The 1970’s Clitheroe bypass was built in an age of short-sighted planners – even more short sighted than the badgers that reveal themselves at dawn as red, black and white pancaked streaks of fur smeared across the tarmac. Pen pushing bureaucrats simply stopped up rights of way that crossed the new highway, without any provision for walkers in the form of a footbridge or underpass. Forty years on, the treeless gravel verged A59 is now so heavily laden with daytime traffic it forms a major physical barrier to walkers trying to link the town of Clitheroe to its natural hinterland.

The faraway country beyond the bypass is a lush patchwork of meadows slowly rising eastwards to a line of 17th and 18th century farmsteads and manor houses sitting at the foot of Pendle Hill. From the well-kept farms, the slope shoots a dramatic twelve hundred feet skywards to the stark gritstone plateau that leads to Pendle’s moorland summit. A natural monolith, like the duller northern cousin of the sun red Australian Uhuru rising from its bleached plain. On the steep western flanks of Pendle, cattle give way to sheep and lazy meadow streams give way to thinly wooded cloughs and rocky chasms.

Always trying to find new routes on to Pendle Hill, it was a June evening close to the solstice that I decided to follow the stream at the back of my house in Clitheroe to its source on top of Pendle. Having traced its course so many times on the map I knew exactly where it started and where it went. Clitheroe stands on the banks of the Mearley Brook, not the River Ribble, and the brook has flooded the town in the not so distant past, a watercourse prone to flash floods, rising and falling quickly in direct response to the nearby rainfall on Pendle Hill. Mearley Brook enters the town via the Upbrooks industrial estate, skirts around Lidl and Sainsburys, and exits the town via Primrose Mill, goes under a railway viaduct and merges with Pendleton Brook to make a remarkably low key entrance to the Ribble near the town’s tip at the end of Henthorn Road. 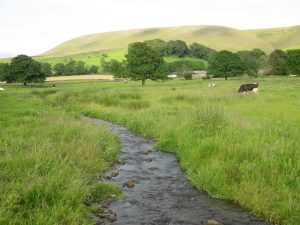 Mearley Brook beyond the A59 bypass

I live by Mearley Brook at the point where it enters Clitheroe and from here it has a rural character upstream to its source in the peat beds close to the Scout Cairn on Pendle Hill. Behind my house the brook is a nettle infested drain where a patrolling heron spends the spring picking off and swallowing stray ducklings. Although walking to the source of Mearley Brook can partly be done by existing footpaths, to stick close to its banks it is necessary in parts to trespass through several fields and climb over a few gates.

I offer no apology for this. I believe we should be able to walk anywhere on uncultivated land if we go about it in a solitary unobtrusiveness manner, without damaging any walls, fences or hedges. If you are light on your feet you will not disturb the wildlife. Over many years I have realised that unless you trespass, you miss a lot of what you set out to see. I could never fully appreciate the micro-geography of Mearley Brook, be familiar with all its little twists and turns, discover its little pebbly beaches where cows sip, unless I leave the rights of way behind and cling steadfastly to its banks.

Like a stealthy stoat skirting secretly along a hedgerow, I wound my way along the brook past Upbrooks Farm, leaving the public footpath to follow the stream course through overgrown thistly fields full of biting midge, arriving at the point where the brook disappears into a dark culvert underneath the bypass. The tiny winding brooks that flow from Pendle Hill towards Clitheroe are blissfully ignorant of the A59 road. Highway engineers have had to cater for their passage.

Crossing the bypass, over another gate and rejoining the brook, the OS map indicates that the watercourse here forms the parish boundary between the rural hamlets of Worston and Mearley. In fact, Mearley is nothing more than a scant collection of farms and thanks to the wonders of Wikipedia I am ‘reliably’ informed that it is the second most sparsely populated parish in Lancashire with a population of just twenty-five people! 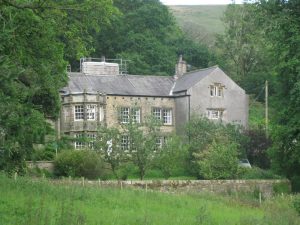 As the brook winds its way up towards Little Mearley Hall and its prominent hillside woodland, I rejoin a right of way – a bridleway – which pleasantly follows the banks of the stream in fields where cattle graze. Hereabouts, the hedgerows of the Ribble valley also give way to the drystone walls of gritstone country.  The bridleway reaches a crossroads of paths near Little Mearley Hall and the brook goes under the bridleway track linking Pendleton with Worston and Downham. I went straight ahead towards the Hall, its mullioned windows and turreted end showing little sign of change since the days when the Nowell Family lived here in the 16th century. The footpath gives a good view of the house and the two storey octagonal bay window at its left end is believed to be part of the spoils of ruined Sawley Abbey, brought here by Christopher Nowell, a relative of Roger Nowell, the local magistrate who first interrogated the Pendle Witches.

The footpath turns left away from the house and through the adjacent farm buildings. Behind the house it is necessary to leave the right of way, which heads for Angram Green and links several farmsteads at the foot of Pendle, and pick up Mearley Brook again which seems to have disappeared under the Hall. It re-emerges in the thick wooded hillside behind the house. A stile and gate leads to a track uphill through Little Mearley Wood. Although not marked as a right of way on the OS map, this appears to be a traditional way up Pendle from Worston and is mentioned in Jessica Lofthouse’s 1960’s book, Lancashire Countrygoer. She notes it as, “a frontal attack on the hill” from Worston, and from here the way does get steeper. At the top end of the dense wood is a stile leading onto the moor. To the left of this is a field gate with a ‘WARNING Bull in Field’ sign on it, worth mentioning only as Jessica Lofthouse mentions a similar sign being on this same gate over fifty years ago! 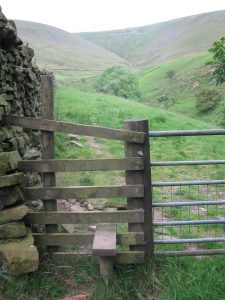 Only emerging out of the woodland do you appreciate the dramatic change in nature of Mearley Brook. No longer hidden in a canopy of green, it is a proper moorland stream, dotted with stunted hawthorn trees, falling in a series of rocky ledges and cascades from the great curving gash it has sliced for itself into the side of Pendle. Although the stile at the top end of the wood does not quite mark the arrival at the boundary of open access country, it is presumably here to provide an access to what is now officially known as Little Mearley Clough – a designated site of special scientific interest. The interest lies mainly in its geology, the incisive stream having cut deeply through a series of strata, exposing rock layers dating from about 320 million years ago.

It took me a good half an hour to climb steeply for three quarters of a mile through the Carboniferous Period. A narrow path, popular with sheep, clung to the sides of the clough as the buttresses of Pendle gradually closed in. Here I spied the only person I saw on the entire walk – a fell runner climbing up the steep spur of Pendle Moor to my left. The pastures became thinner and the view became wider as I swung left up the deep cleft and finally got my boots in the trickling waters and awkward pools of the brook that runs sedately behind my house. To my right, rivulets cut into the almost vertical wall of rock and ferns, cascading down into the stream. 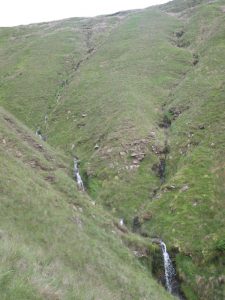 Following the stream bed near the top of the hill I clung onto grass clumps at the sides of the gully and disturbed a skylark that darted out in a panic from the stream bank. Closer inspection revealed a little hole in the hillside in which, delicately weaved into spirals of grass, I saw, for the first time in my life, a lark’s nest with four tiny brown speckled eggs in it. Having previously said that if you tread quietly enough you will not disturb wildlife, I apologise profusely to the mother skylark but thank you for the photo. 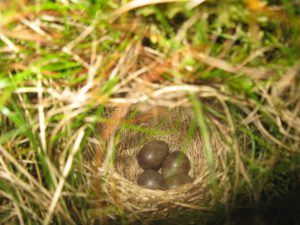 Skylark nest found in the upper reaches of Mearley Clough

Follow many of the world’s greatest rivers to their source and you are likely to end up at a disappointing damp squib. Mearley Brook is no exception. Clitheroe’s river, the town’s main drain, a tributary of that elegant dame, the River Ribble, flowing west to the Irish Sea, begins its life as just one of numerous vague springs seeping sluggishly out of the brown peat of Pendle’s flat topped gritstone plateau. For the record, if any intrepid explorer wishes to seek out for themselves the source of Mearley Brook it is located at OS Grid Reference 789413, nearly one mile west of Pendle’s summit and about 150 metres south of the Scout Cairn.

Mearley Brook’s grand entry to the surface of the earth may be even less eventful than a damp squib but the few miles spent exploring its upper reaches leads the walker through dramatic changes in geography and landscape, not to mention millions of years of geological history. Apart from that, the view north and west from the Scout Cairn as the sun set on a summer’s evening revealed an exquisite layered effect. The vast dusky carpet of the Ribble Valley gave way to the stark black line of the Bowland Fells and further to the north-east, the sharp stepped contours of Penyghent. Above Fairsnape Fell the sun slowly sunk and radiated a thin red line across the top of the ridges, daubing the white clouds with a haze of pink. 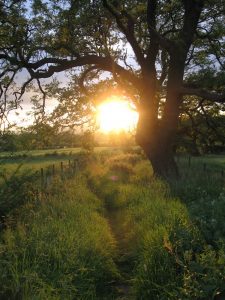