Pendle to Parliament: A Long Distance Walk across England 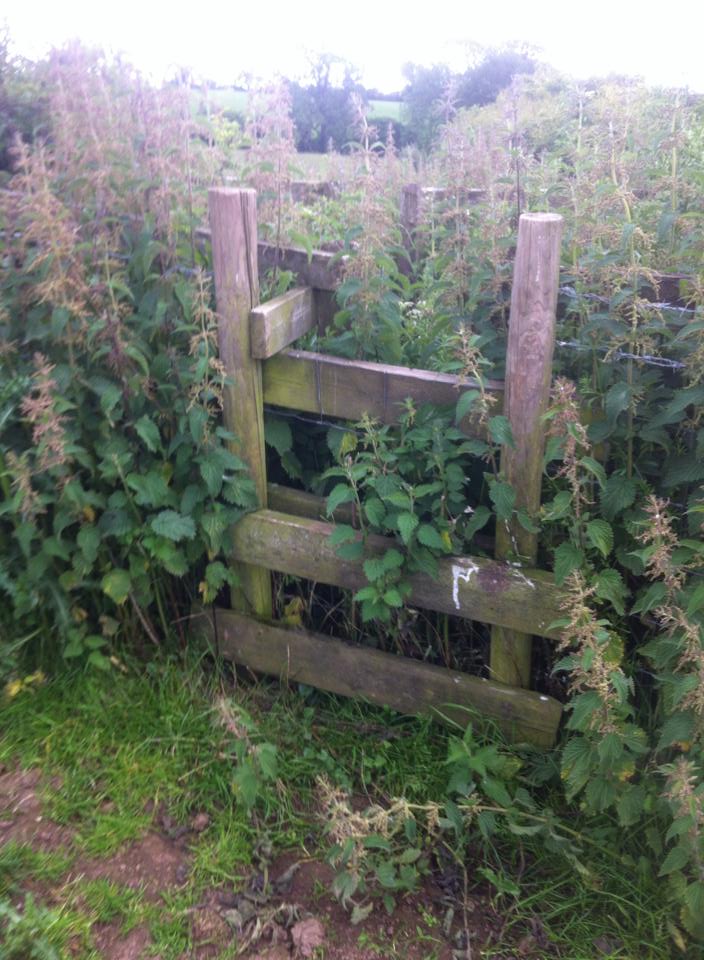 Any man can draw up a petition, and any man can carry it up to

London, with instructions to deliver it into trusty hands, to be

presented whenever the House shall meet.”

Over the last eight years the traditional English field path has become the innocent victim of Tory austerity. A report by the walking charity the Ramblers in 2012 could have been written in the blood of axed public rights of way officers. It stated that 70% of highway authorities – county and borough councils – had cut their footpath maintenance budgets and that many councils were considering axing rights of way teams all together.

Highway authorities have a statutory duty to maintain and protect footpaths and bridleways. But in an age when the coffers hidden away in the deep recesses of county halls have been spent there is no money left to improve, protect and promote our public rights of way. They have always been given a low priority even though they provide a vital and cost effective means by which families can access the countryside for outdoor recreation.

Whilst the total mileage of our public rights of way network has remained fairly static over the last ten years, in that same period nearly 2,000 miles of new roads have been constructed. David Cameron’s coalition government (2010-2015) trumpeted its own roads revolution in 2013, earmarking £15 billion to be spent on over 80 new road schemes and 1,300 miles for extra lanes over a five year period. There was, sadly, none of these billions earmarked for new walking, cycling and horse riding routes. Even though road transport already accounts for one fifth of British carbon emissions there is no seismic shift in transport policy imminent. It is forecast that road traffic is likely to increase by 40% over the next twenty years.

It is against this depressing backdrop that in June 2015 I decided to descend on London  the old fashioned way, on foot, and present a petition to Parliament. I would walk from my home in Lancashire to the capital city to raise awareness of how public sector cuts in the name of austerity were impacting on the ability of people to walk through the British countryside and enjoy its simple pleasures. I would demand that the government deliver more investment in walking. To emphasise the point of my campaign I would also attempt to do the walk by not following any classified roads. I would have to cross them and link rights of way on either side.  But I would not follow them.

In walking from Lancashire to Parliament with a paper petition and a rolled up sleeping bag in my rucksack I would be following in the tradition of early 19th Century protesters. On the 10 March 1817, some 5,000 unemployed hungry weavers met in the open space of St.Peter’s Field, Manchester. Their plan was to march down to London with their signed petitions and present them directly to the Prince Regent; their ultimate request was that the fashionable beau, Prince George, sitting in for his mad parent, King George III, take measures to remedy the distressed state of the Lancashire cotton industry.

Appealing directly to the monarch for help was a romantic and desperate notion. But for a poverty-stricken people ravaged by the turmoil of the Napoleonic Wars, high food prices and the traumatic shift from handloom weaving to the factory system, the destitute Manchester weavers had little alternative. They did not have the right to protest in any great numbers. They did not even have the vote.

The Blanketeers arranged themselves in small groups of ten to avoid being arrested for illegal mass assembly. Each group carried a petition signed with twenty names. The idea was they would march south following the legal public highways, only stopping to sleep but not linger, for fear they would be arrested under vagrancy laws. The leaders of this peaceful crowd of South Lancashire weavers and labourers, the radicals Samuel Drummond, John Bagguley and William Benbow, had hoped the march south would pick up discontented hungry people along the way.  They would arrive in the capital as a swelling mass of tens of thousands protesters that could not possibly be ignored by the nation’s rulers.

The walking weavers took their inspiration in part from the vague notion of the Magna Carta of 1215 and its establishment of almost mythical personal liberties. But more relevant in the popular imagination of the Blanketeers was the Peasants’ Revolt of 1381, when Wat Tyler entered London with a mob of Kentish rebels to personally negotiate with young King Richard II. The grievances of the 14th century rural poor largely concerned high taxation and slave labour – and the King listened to their list of demands.

Allied to this quaint idea that the hungry northern weavers could gain a sympathetic ear through personal engagement with the Prince Regent was the belief in the statutory right to petition the monarch directly. Only four months before the 1817 Blanketeers March, the popular radical writer William Cobbett had published his Address to the Journeymen and Labourers, in which he stated that any man could draw up a petition and take it to London.

So it was that the 5,000 marchers ready to set off from St. Peter’s Field, Manchester, on the 10th March 1817 believed they had a just and popular cause and were acting legally. The local magistrates had a different view and sent in the cavalry in the form of the King’s Dragoon Guards to arrest twenty-nine of the ringleaders.

It was a relatively bloodless prelude to the national tragedy that was the Peterloo Massacre, which occurred on the same spot less than two and a half years later. In fact, it was the response to the civil unrest of the Blanketeers’ March that led to the formation of the Manchester and Salford Yeomanry. This was the infamous troop that scythed down innocent people during the bloodshed of St Peter’s Field in 1819.

As for the leaderless Blanketeers, it is estimated that some 600 of them still set off marching from Manchester but the authorities had dispersed or rounded the majority of them up by the time they had reached the outskirts of the city. Some 200 marchers were arrested on the London Road on the outskirts of Stockport. The rest were largely turned back by the time they reached Macclesfield and Leek with a few stragglers arrested at Ashbourne. So what had been planned as a major working class insurrection fizzled out along the highways of Cheshire and Staffordshire. 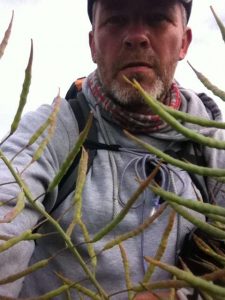 Walking through the English Midlands – a typical Leicestershire field path

Just as the original leaders of the Blanketeers were imbued with the spirit of Wat Tyler and the Peasants’ Revolt, I was carried away by the romance of the 19th Century weavers’ hunger march. My petition demanding the government invest in walking was not signed by thousands of impoverished ramblers. It was signed by only me. As parliamentary procedures state, e-petitions aside, anyone can submit a public petition to the House of Commons and ask your MP to present it in Parliament. It only needs one signature. You are then reliant on your MP taking up your cause and formally or informally presenting the petition to the House on your behalf. They are not obliged to. So the whole system relies on your elected MP being sympathetic to the cause.

With my own journey from Lancashire to London I wanted to show that walking across England on footpaths and bridleways  free of motor traffic could still be done. Hopefully not as a last hurrah to the neglected underfunded definitive rights of way network but as a rallying call to reinvest and give greater priority to one of our greatest national assets. For the health of the nation, we need our footpaths and bridleways. 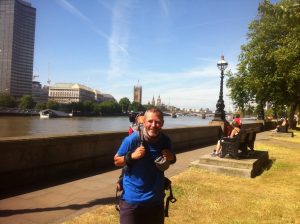 The rambler arrives at Westminster